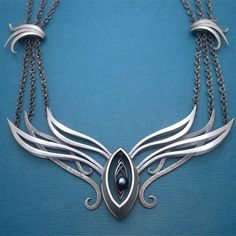 The Necklace of Mirages was a magical artifact of great power, renowned for its ability to create illusions so real that they could deceive even the wisest of sages. The origin of this remarkable artifact was shrouded in mystery, but one tale stood out above the rest.

The story began with a young wizard named Nivara. Nivara was a gifted mage, with a keen mind and a passion for the art of illusion. Despite her youth, she was already considered one of the most talented illusionists of her time.

One day, Nivara stumbled upon an ancient tome that contained the secrets of an even greater wizard, one who was said to have mastered the art of illusion to a degree never before seen. The wizard was named Miragius, and the tome contained his teachings and the spell that created his most famous artifact, the Necklace of Mirages.

Determined to learn the secrets of Miragius, Nivara devoted herself to studying the tome and practicing the spell. She labored for many years, honing her skills and perfecting her art.

Finally, Nivara succeeded in creating her own Necklace of Mirages. The necklace was a beautiful piece of jewelry, crafted from the finest materials and imbued with a powerful magic. With the necklace around her neck, Nivara was able to create illusions that were more realistic and convincing than anything she had ever created before.

With her newfound power, Nivara set out to make a name for herself as the greatest illusionist the world had ever seen. She traveled far and wide, performing for kings and queens, sorcerers and peasants, and wherever she went, she left her audience amazed and bewildered.

As time passed, the Necklace of Mirages became the stuff of legend. The tale of Nivara and her magical necklace was passed down from generation to generation, inspiring new generations of illusionists to strive for greater mastery of their art.

The necklace is an intricate silver braid with an odd pearl like gemstone that swirls its appearance if looked into. A small clasp in the back secures the necklace to its wearer’s neck. As the wearer uses the necklace’s abilities the gemstone’s swirl is more obvious.

The necklace may only be used 3 times a day safely. For each time the wearer uses the mask being the 3rd time they must make a save (WIL DC 10 3E, Spell 2E) or start hallucinating their own thoughts. This affect is permanent, short of a wish or miracle spell. The wearer will eventually go insane as their own thoughts manifest themselves as illusions in their own mind. This will happen over weeks. Removing the necklace does not remove the insanity.