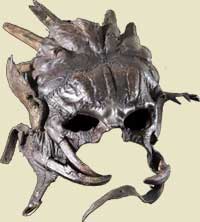 A group of nine experienced evil adventurers known as the “Dusk Imps” had spent years raiding tombs, ancient protected temples, and stronghold vaults being relatively successful. On a few occasions they ran into trouble when their strongest warrior, a half-ogre named Nefatror, had become charmed or disabled by enchantment magic rendering him useless. Once he almost turned on the party from a charm spell.

After the last incident the party’s mage designed a helm specifically for the brute. It protected Nefatror from mind spells and charms. Crafted from powdered jasper, a stone appearing similar to an emerald, within a dwarven skin the helm was simple in shape, ugly in appearance, and seemingly worthless looking. From a warrior’s first glace it would even seem as if the helm would not provide much protection. This was done on purpose to hide its true ability.

In one such later tomb raid the Dusk Imps ran into more than they could handle. The tomb’s resident, an unknown lich, was disabling the party one at a time by spells and traps within his tomb. After a while the half-ogre was realizing that he just kept getting injured every time he touched, opened, or stepped on something. He started refusing to be the party’s trap detector.

When only five members remained, the group’s priest tried to persuade the warrior with magic to continue being fodder. He unwittingly forgot the power of the helm, but the half-ogre did not. Within a few brief moments Nefatror’s rage at the attempt turned the rest of the party into corpses. He took all their treasures and left the tomb unharmed.

Some say the lich just wanted to be left alone and let the half-ogre live, but others claim that the unknown lich was so amused by the brute’s act he decided to let him leave unharmed. Of course one has to ask, what lich has a sense of humor.

Abilities: The helm offers a +1 protection to deflection AC. It also make the wearer immune to mind affecting spells of 4th level or lower. It is made for large sized creatures or humans of very large size.