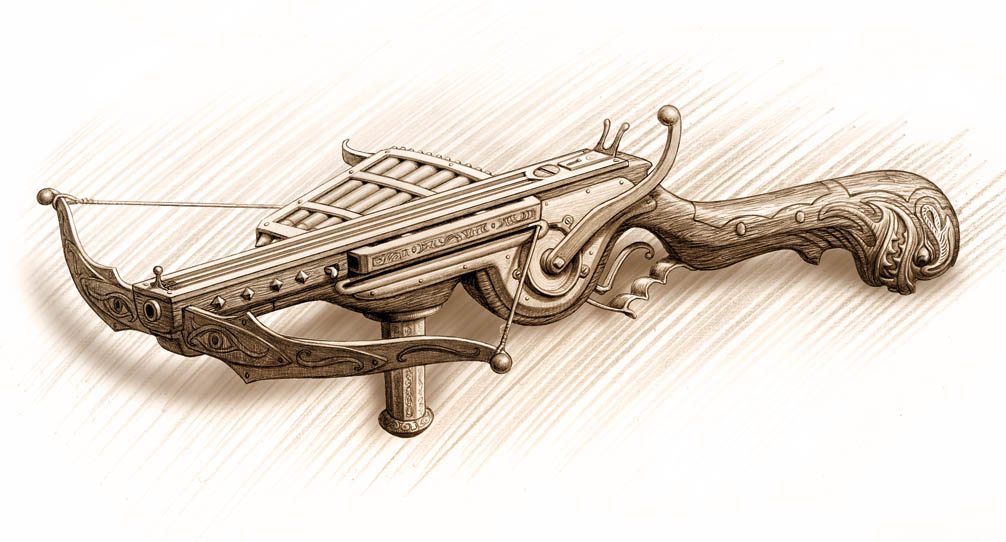 This is a specially made weapon and moderately experimental. It was designed and is produced by Frizzy Gnobbletoppin, a Gnome. It is only manufactured by Frizzy and his direct apprentices, who are required to be at least a Journeymen before they are allowed to work on the crossbows. Frizzy fancies himself an inventor although most of his inventions are either not practical or never totally worked. The burst-fire crossbow is no exception to the rule, but its malfunction rate is tolerable for its ability. The idea for the crossbow came after Fizzy witnessed an attack upon a small human fort by some humanoids. “Regular crossbows are too slow and don’t kill those darn orcs fast enough” he was fond of quoting about his weapon. “I only sell my crossbows to reputable types” states Fizzy when a new customer enters his store. If he does not like you, he won’t sell you a crossbow.

Abilities: The burst-fire crossbow is always treated as a masterwork weapon, granting it the +1 bonus to attack rolls. The burst-fire crossbow has the advantage of being able to fire 3 bolts in one round. This speedy rate of fire sacrifices the range and some of the accuracy of the other crossbows. On a roll of 1, a critical failure, the crossbow has a 50% chance of jamming which takes 1d4 rounds to dislodge a jam.

The bolts themselves are smaller than regular crossbow bolts and a player must learn how to make them from Frizzy himself. He will be glad to sell you as many as you like though. Upon a successful hit there is a 10% chance the bolt will bounce and do no damage due to its short length. Although the chance of any of these bolts breaking is also only 10% on a miss or hit so they are easily recoverable.

Quick Draw will allow you to draw the weapon as any other but it does not decrease the time between drawing and firing the weapon unless it is pre-cocked. While carrying the weapon pre-cocked if a character makes a jump or fall of 10 ft. or more the weapon has a 1 in 6 chance of going off.