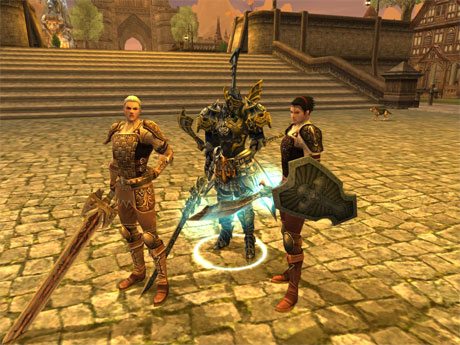 “If you find my missing necklace, I will reward you with some gold.”

“My son has been kidnapped, if you find him I will give you this magic trinket.”

“This group of orcs killed my father, if you avenge me I will train you in lock picking.”

What’s wrong with all this? Nothing except that this is the typical play of online RPGs. I have played a few of them and within a short period I canceled my subscription. These worlds are plain and simply BORING. The writers of some of the most popular online RPGs have lost their way and have given in to pure marketing in my opinion. The days of actual thinking and problem solving for RPGs is over.

The 1980’s: When RPGs began on the PC they came out with excellent text games such as Zork I, Borderline, Planetfall, and other games from a company called Infocom. The games could be figured out with time and logical deduction. Some games were mysteries while others adventures. Back then you had to think.

The 1990’s: Then I discovered the wonderful world of text MUDs (multi user dungeon). MUDs were a text based game that was designed around an online world. Players could play for free and they were the basis for games such as Everquest. A lot of good thought went into these games and the adventures they provided. Some MUDs allowed you to play a good or evil character forming a race war. When you were in a dungeon you could run into an evil party and have combat, assuming you played good characters. It was exciting and dangerous. Many of the adventures in the MUD took thought and had mysteries to solve.

Modern Times: Unfortunately the prerequisite for making a good adventure game online is not the quality of the thinking process, it is the graphics and marketability. My first three sentences in this article sums up the “thinking part” of online RPGs. Any puzzles I have seen in online RPGs make no sense to the adventure and are placed just to give players something to do. Usually the puzzles are simple “move the tiles” or “solve the lights” type of trial and error problems. Even in many single player RPG games I am finding that these companies make the problem solving aspect of the game so difficult you need a gaming guide to complete it. The problems are so rediculous that logic is thrown out the window in many cases. It is now guess work not deduction.

Players: Another unfortunate issue for online RPGs are the players themselves. Instead of thinking/problem solving kind of players most of them are hack and slash power gamers. Many run through an adventure with the only intend of leveling or gaining some item. I have found very few players that take their time, thoroughly enjoying the adventure.

Magic: Another problem I see with most of these online RPGs is magic. They give too much, too fast, too easy. In DDO, for example, I had an endless supply of magical swords, potions, and scrolls I would never use that I could sell for cash. Marketing has created its own group of players that simply desire power and action.

Things I could suggest for online games:

Appeal to All: Make different servers that appeal to power gamers and those that prefer a slower pace.

Problem Solving: Create adventures within your world that require thought. Where clues are revealed on how to solve an adventure mystery by examination and patience.
EXAMPLE: Hidden meanings in descriptions or conversation between NPCs that gives clues on what to do next or where to go. Players have to take time in their surroundings to discover these clues.

The Bigger Picture: Create sequenced adventures that lead up to one another.
EXAMPLE: Adventurers may find half of a runed amulet in one adventure that leads them to another. They both tie in to a greater adversary.

Crafting and magic items: Magic items are suppose to be rare, an uncommon commodity. Instead focus on the character and its development. If players are throwing away +2 swords like rotten apples because they are not even worth their time to sell, well there is something wrong there.

A Ttough World: I would suggest making death costly. This would encourage thinking to avoid these penalties. Players would think twice about “running through a dungeon”.

Many Adventures: I would also suggest that the world creators make much more than enough adventures for players to advance to their highest level. Penalize severely those that repeat the same adventure over and over just to level up. This of course requires more writers and a hell of a lot more creativeity.

Good and evil: I like the idea of a player vs player conflict within the game. Make zones where PvP is allowed and zones where it is not. Players can choose where they wish to go.

One world that I find very exciting is Layonara. This is a Never Winter Nights free world that was created. It features many of the attributes above and plays by straight D&D rules. It is a tough world where gaining items is very difficult. Crafting is rewarding and yet also difficult. Dangers lurk on many roads outside of a city and caution is required to travel. I feel the writers of this world have done the best with the NWN system to create an excellent world. I find that players can’t simply run through an adventure, they have to think their way through also. The irony is that it is free. A high quality world to adventure in and the players don’t have to pay a dime. Try them out. That is the reason I support them.