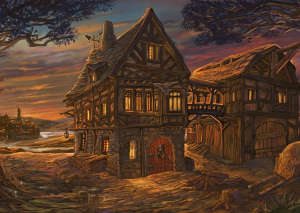 Soon everyone was preparing for dinner, while Crinn headed out to search for the man named Bandon.

Luce put on her finest robes and jewelry before sallying to the Palm Court to dine with Dorothy Hammonds and her friend Agnes Seeshawn (wife of the deceased farming magnate, Laurence Seeshawn). Luce pleaded her case to the two women regarding the sea lynxes they purchased from the circus, and the women were pleasantly receptive. Mrs. Seeshawn, who owns large agricultural holdings in the west of Courtenay, was acutely interested in the work of Lucia’s order. The Trors and Seeshawn share a mutual interest: thwarting the efforts of various Fribbishire merchants to use magical means to increase crop yields. Seeshawn’s financial interest in putting an end to this research was obvious; although her land holdings and operations might be larger than the Fribbishire growers, the new techniques could help these smaller businesses compete with her. But the lady also seemed genuinely motivated by a fear of these new method’s impact on the land, methods which leave the soil completely depleted of minerals after only a single season. This latter issue is, of course, the primary concern of the Trorish order. Hammonds and Seeshawn were abashed to hear that the lynxes they bought were endangered in Lundy, and they seemed a bit starstruck to be dining with royalty. By the end of the meal, they not only agreed to give the animals to Lucia, but also asked her to speak with Brother Itten about future cooperation between “Seeshawn and Sons Growers” and the Trors.

Daniella’s dinner was not so auspicious. Soon after arriving at the dining room of the Sandpiper with “Lieutenant” Gracas, Lieutenant Ochs and Captain Johns arrived as well. Gracas was just on the verge of making some kind of speech to Daniella, when Johns noticed him and his naval uniform and immediately questioned him. “Gracas, what are you doing in that outfit, man? Get home and get changed before someone sees you! Don’t you know that impersonating an officer is an offense punishable by 200 lashes?” At this point, Daniella looked as if she were about to be sick, and Ochs intervened on her behalf – begging Captain Johns to lower his voice and leave the lady and her companion to their dinner. Looking absolutely mortified, Gracas immediately jumped up from his seat and exited the Sandpiper, offering only the briefest downcast apology. After Daniella’s dinner companion had left, Ochs invited the lady to dine with himself and Captain Johns. Johns elaborated only briefly on Gracas’ situation. Apparently the man was a clerk in the Office of Promotions at Fort Jeunise. At this point, the subject was politely changed, and the three companions finished their dinner.

Meanwhile, Crinn was out on the town searching for Bandon. He wound up at a bar for old sailor’s called “Bumpy’s”, and after convincing the man at the door that he was there to see someone he knew, he was admitted without a hitch. Inside there was an exotic performance being put on by two southern women, accompanied on guitar and a single drum. Crinn enjoyed the performance and found out that Bandon worked for a man named Krees, who was a weapons smuggler. The operation was fronted as a paper imports operation called “Krees and Keffler Paper”. After a few more drinks, Crinn proceeded to the warehouse, crossing over to the roof using a rope and grappling hook. He discovered a great deal about the layout of the warehouse and the number of men inside, and then returned to the Sandpiper to confer with the group.

Back at the Sandpiper, the party retold the events of the evening and agreed that the next night they would attempt to apprehend Bandon from inside the warehouse. In the meantime, two burly men showed up with a bag containing what at first appeared to be an animal of some kind. They claimed to have been sent by Freddy Ogutu, and an accompanying letter confirmed that inside was a man who had told the navy a bit too much about their plans to free Vickers. Eventually the party opened the bag and let out a halfling named Fader Puddlegum. Fader demanded a sandwich in return for behaving himself and staying in the room.

The next day Luce spent the morning running errands. She had Daniella pick up the Tome of Leadership she had left at Zabreel’s and then went on to the market square to have some cages built for her soon-to-be-acquired lynxes. She also picked up the weapons she had ordered, and convinced Anubis to get the concierge to put up her animals in the stables of the Sandpiper. From there it was on to see Abel Bunting at the circus. She informed him that she would be taking possession of the sea lynxes, and got Bunting to agree to keep them in their circus cages until she could have her own finished. She agreed to take charge of their care and feeding in the meantime.

At the same time, Anubis went to see a naval attorney named deBeers, who had defended Vickers at his court marshall. Anubis asked deBeers about Vickers’ death, and he confirmed that Vickers appeared to have filed through the bars on his cell window and leapt to his death. How exactly Vickers may have obtained the tool to remove his bars was still a mystery. deBeers also noted that he was, like Captain Johns and Freddy Ogutu, surprised by the severity of Vickers’ sentence. He took Vickers’ case expecting a routine slap on the wrist, but the officers on the court marshall seemed out for blood in this particular instance. deBeers thought that maybe some high level message came down that desertion was on the rise, and that the officers needed to set an example. It’s the only reason he could come up with for the sentence of death. Anubis noted that deBeers seemed generally honest, and he was even kind enough to provide a writ authorizing Anubis to see Vickers’ body. The next stop was the morgue, where Anubis confirmed that it was indeed Vickers’ body. Since the two men had spent a great deal of time together in Holbekker’s “Kraken”, Anubis recognized the man right away.

In the evening, everyone assembled back at the Sandpiper, where they found Morgan beside herself from dealing with Fader’s antics. But Crinn was still scoping out the warehouse of Krees and Keffler Paper. He manage to climb a ladder up the side of an adjacent warehouse and after securing a grappling hook as quietly as possible, he clambered across to the top of Krees and Keffler. Using two roof access panels, Crinn climbed inside to get a view of the layout of the building. There seemed to be about 14-18 men inside, most playing poker, and there was a gangway via which one could gain access to what appeared to be a living area and several offices. He also took note of a balcony door which provided easy access to this living area. There were a few touch and go moments when Crinn tried to climb across to the next building over and make his way down. Some of Krees’ men heard the noise of his grappler, and came out to investigate, but Crinn laid low, and soon the men returned inside.

Crinn was soon back at the Sandpiper, where the group proceeded to plan their infiltration of the warehouse for the next night.