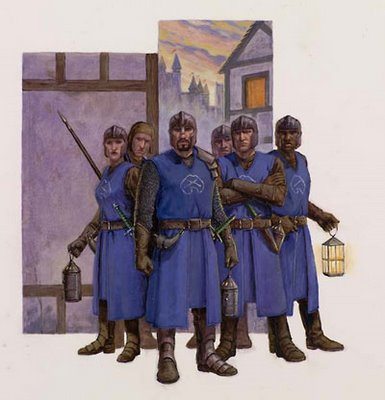 Once the group had hatched their plan, it was only left to wait until the following evening. In the meantime, Luce and Daniella returned to Marvey’s shopping district to pick up a few more items.

After nightfall, the group proceeded to the edge of the street near the warehouse. Daniella tried to cast sleep on the balcony guard, but the spell failed. However, Daniella was able to make Crinn invisible long enough to climb to the balcony and knock him out with a sap. The rest of the group then climbed a grappling hook to the balcony level. Daniella proceeded to cast the invisibility spell on herself before she and Crinn crept inside the warehouse with all possible stealth. Crinn entered what appeared to be a dim bunkroom, where he found several guards asleep. He made his way around the room’s L-shaped walkway, where he found a man whose face was unmistakably that of the horseman the party had encountered on the road from Marvey – the man who had to be Richard Bandon.

Daniella again cast sleep, this time on two of the slumbering guards, but her spoken encantation roused the remaining two from their natural rest, as well as the man in the bunk across from Bandon’s. This third man immediately attempted to lash out at Crinn, but he deftly hurled a tanglefoot bag at his attacker, cementing him to his bunk. All of this action quickly had Bandon out of his own bed, and Crinn summarily smacked him with his sap. Daniella cast magic missile on Bandon, and another shot from Crinn’s sap put the man on the floor before he could get much more than a wild swing in at the agile rogue. The sound of commotion brought Lucia into the bunkroom, whereupon she immediately let loose a fog spell to confuse the waking crew of smugglers. Lucia was then able to bring down the confused men with her sickle, but all of this noise seemed to bring more men to the stairs to investigate. Anubis leapt into action with his falchion and viciously beat them back until they retreated.

Luce managed to get Bandon’s limp body out of the bunkroom, and Anubis tied him into a harness on the external balcony before lowering him to the street below. Daniella intelligently hefted Bandon’s footlocker over her shoulder, and soon the party was on the street outside the warehouse with their unconscious quarry and his belongings. The party immediately began looking for an inn in a secluded section of Marvey’s poorer districts. A brief search turned up exactly the kind of seedy establishment they had in mind. The woman at the inn took their business, but their suspicious situation led her to ask for a deposit. This the party willingly paid, and soon they had Bandon upstairs in a small room. They rifled through his footlocker and removed a medium-sized sack, a number of letters and journal pages, and a strange cone-shaped object. Lucia healed Crinn, who had taken several blows from Bandon’s bunkmate, and Daniella and Lucia quickly decided to return to the “Sandpiper” to rest from the night’s ordeal. Crinn also departed for the “Old Transom” to make last-minute arrangements with Ogutu, and to let him know that the letters and journal pages they’d found among Bandon’s belongings exonerated Vickers of his alleged desertion.

Anubis was left alone with the prisoner in the run-down Marvey inn, and this proved to be a vulnerable position. Before long, four men came trudging up the stairs to the locked room. The men beat the door down, knocking Anubis against the back wall. The sailor’s instincts for melee took hold, however, and he snapped back to the door with his falchion, doling out a number of terrible blows and felling one of the assailants before the others could cut him down. Anubis lay unconscious on the floor while Bandon’s liberators carried the man away from the blood-spattered room.

Fortunately for Anubis, Crinn soon returned to check on him, and he was able to bring aid to his injured friend. Bandon, however, had escaped without being interrogated. There was little time to lament the man’s escape though; the “Porpoise” was to leave on the morning tide.