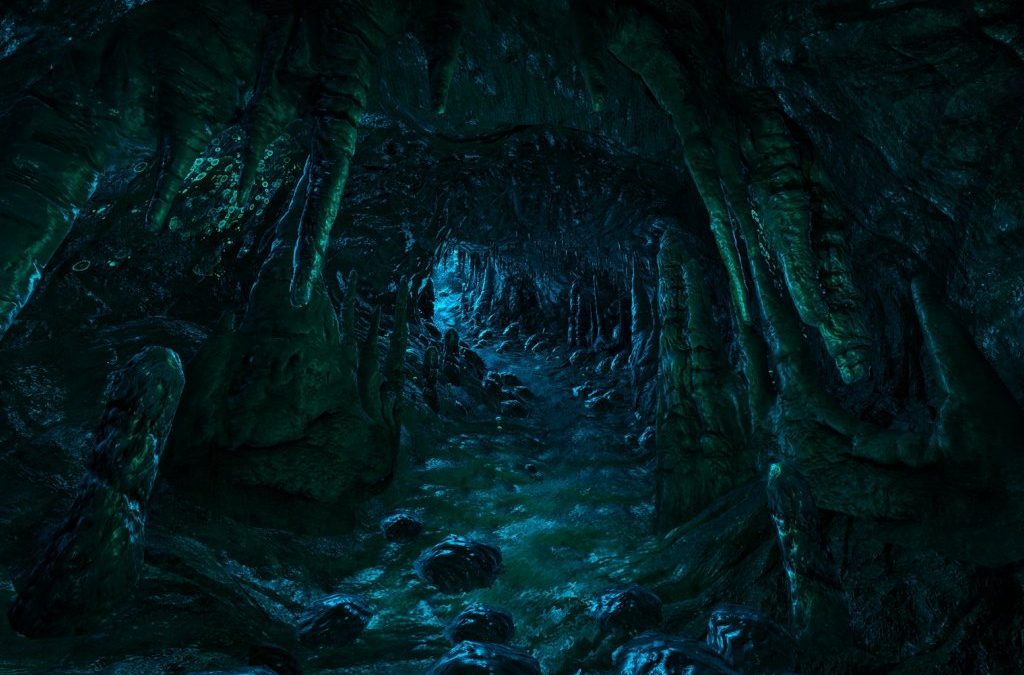 Xoth’s stronghold was built for the purpose of not being found. Xoth wishes to lead his new empire from Ganth’s kingdom but even the best laid plans are prone to the unexpected. The mountain stronghold provides a secondary location in case his plans fail. Nestled in the corner of two mountains lies the outer walls of the stronghold. So far that is all that has been built. There is no gate, no moat, and no guards. Only a single large cave entrance can be seen over 200′ away at the base of the mountain.

The caves themselves have high ceilings, 25-30′, and nooks from 6″ to 7′ in depth and height. These nooks were areas dug out by dwarves for mining pusposes. Usually every 4 squares you can expect 2-3 nooks.

1. Simple Cave: This is a very wide natural cave entrance. The ground is made of dirt and rock and has some grassy growth. A wooden sign is learning up against the left cave entrance written in dwarven “danger excavated”. A stale smell comes out of the cave entrance. Upon further inspection (DC 18 tracking) a PC can see that tracks lead in and out of the entrance. The sign was propped up against the cave. In the 20′ nook at the back part of this area lies a Monitor Lizard MM 275 3E. She will try to remain hidden covering her nest with 6 eggs. She will not attack unless provoked.

2. Monstrous Mold: The opening at the entrance of area two to the end of the eastern corridor leading to area three is covered in brown mold. Only a 7′ wide worn path is cleared in the center of this 190′ path. PCs will be hard to detect the mold as they approach the turn leading into this area (DC 23 to spot). If the 1st character misses spotting the mold they will be exposed to one round of its effects. The mold stretches to the ceiling. Any fireball launched into this area will literally have the mold grow to cover the area of the path and cave preventing further movement. In the center of the cavern is a large humanoid shape that is part of the mold.

3. Troll Grounds: In this area there are a lot of scattered boulders (5′ to 7′ in diameter), bones, and a slight smell of spoiled meat. 7 trolls MM 247 3E inhabit the area. They will use the boulders to hide and ambush the party. If the party makes any noise, casts any spell destroying the mold from area 2 the trolls will be alerted. Several trolls have already lost their lives within the mold, a long torturous death because of their regeneration ability. They have discovered how to not be affected by the brown mold. Since they are cold blooded creature the trolls have learned to hold their breath (not exhaling hot air) while moving carefully down the path to avoid being consumed by the mold in area 2. They will usually feel a chill but the mold does not affect them.

4. Waste: The cave is scattered with unwanted broken mining equipment, broken barrels, broken crates, rag clothing, and other assorted useless items. On the back 40′ of the room is a 20′ deep pit. Inside there are the bodies of the former workers and bones of other various creatures. The smell increases as the party draws closer to the pit.

5. Troll Grounds: This area is the same as area 3 except the trolls here will not be expecting the characters. There are 9 trolls MM 247 3E dwelling in this cave. The largest troll holds a key made of iron.

6. Dark Waters: The cave is almost filled completely with a dark murky water. The cave gradually declines to a depth of 4 1/2 feet, in its center, then inclines back up to ground level. This occurs over a 60′ span of the cave with its center 20′ length being mostly 4 1/2 feet deep. The sides of the cave only drop to a depth of 3′ deep. Scattered on the sides of the cave, in the middle 20′, of the deepest part of the water are lying 12 Bone Reapers. They only attack creatures that come within 25′ of them. Thus the 10′ center section of the water is safe from attacks by the undead. They are lying down in the water motionless and undetectable except by magical means.

7. Prison: As this cave opens up an iron fence raising 15′ from the ground blocks off any movement to the larger section. There is a closed iron door locked by chain and a complicated lock (DC 23 open locks to pick). The top of each prong in the iron fence are shards of twisted metal fused within to prevent escape by prisoners (Climb DC 28, fail 2d6 damage and impale for 1d6 a round till the player is removed from the spikes). Within this prison is dirty straw scattered about and 3 dry bowls. A young man in his 20’s is being kept here. He is slightly malnourished but in otherwise good shape. His name is Jared. He was one of the workers assisting to build the stronghold walls. He knows nothing of the rest of the area. He only knows that Ganth killed all the other workers, put him to sleep, and the next thing he knew he awoke here. He is scared and wants to go home but will not leave without the party escorting him. The young man heard the sounds of the trolls and other horrible things in the caverns.

8. The Big Slide: This is a 45 degree slope sliding down into a lower part of the cave. Small plant life grows in this part of the caves. Any druid or ranger will identify it as moss. It has spread on the walls of the cavern and the slope down. The moss is slippery and prevents anyone from climbing back up the slope.

9a and 9b. The Ambush: In each of these large caverns are around 50 niches of about 3′ to 7′ in diameter each. In each niche appears to be skeletal remains of warriors dressed only in their helmets and some beaten up armor ranging from leather to chainmail. Each figure is seated or balled up in their niche, motionless. In each of 9a and 9b the farthest back niche, which is the largest, is covered by a large circular brass shield. The shield has an insignia of a flaming eye. These shield niches are about 10′ from the ground. In the center of each area are three sticks tired together by leather straps forming a tripod. In the tripod is a glass sphere 3″ in diameter emitting light from a continual light spell.