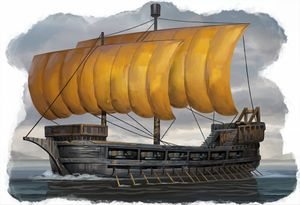 After their meeting with Blackthorn the players will want to arrange for a boat fairly quickly. Finding a boat going to Land’s Edge is difficult, it is not a major port, or on a major route. Eventually the players will come across a galley named “The Merry Ann” run by a Captain Pectas. Pectas will take the players to Land’s Edge during their cargo run. The financial arrangements will of course be made by Charilus, so the players will direct Pectas to him and begin to move on board. Before the ship leaves Charilus gives the party several potions of water breathing, one for each, “Just in case you need them.” he says.

After arrangements have been made, Pectas will introduce the players to his crew and show them to their quarters. They will have to sleep 2 to a cabin with only 3 cabins available, if more than 6 party members they will have to go 3 or more.

After settling in they take off. The journey to Land’s Edge is mostly simple, you might throw in a side encounter. Also when they get within a week from Land’s Edge, the ship is caught in a harsh storm and some things are damaged. Captain Pectas wants to put in at Land’s Edge to resupply and fix up the ship.

Once they reach Land’s Edge the longboat will be put down, since their is no large port here, and the players along with the shore crew will go to the pier, see Land’s Edge area 2. When they reach the pier they notice that their is no activity, no one is around. The sailors seem to think this is odd but shrug it off, they tie off the longboat and leave 2 sailors to guard it. The rest of the shore crew accompany the party into the town.

Entering Land’s Edge the players notice no one has come to greet them, the town has an abandoned look about it. The sailors become spooked at the eerie silence. Checking some nearby buildings the players notice that they are all empty, though in a few their is some signs of struggle and perhaps old blood.

The first sign of life is when a flock of birds suddenly takes flight in the distance. This scares some of the sailors, who are then taunted by the others. Unfortunately the flock, which is heading this way, are not birds. Anyone watching it will notice the flock is coming towards them, and that they are Stirges! 20 stirges, see Land’s Edge area 4, attack the party and crew members. They do not retreat from combat but leave if they fill up on blood.

After the players have been away from the docks area for a bit allow them to hear some strangled cries of pain and terror coming from back towards the docks. By the time they arrive the 2 guards are gone though the severed arm of 1 guard close at hand. A trail of blood leads into the water next to the pier. Also the longboat has been damaged, its bottom kicked in by appearances.

No signs of the attackers are nearby but some signs, the blood trail, the drag marks, a few wet spots, give the impression they came from and returned to the sea. The players will probably want to signal the ship to pick them up. Eventually the ship will spot signal attempts, fires or spell effects probably, by the party or after a long delay they will send out the other longboat. This is the only other longboat on the ship.

The players will barely be able to see the boat dropped into the water and its crew paddling towards shore, unfortunately the Laceodons attack the boat well before it gets close to shore, but out of bow range, too bad. The Laceodons swarm the boat, knocking crew members over the side and paralyzing all within reach. Very quickly all the crewmen are dragged under to be paralyzed, drowned, or just clawed to death.

If the players think to help out mention that the longboat is over a mile away and they will not arrive in time. Those who have the water breathing potions could use them but 8 Laceodons should quickly overwhelm them in the water. After the loss of the 2nd longboat Captain Pectas will be unable and unwilling to send another rescue team after the group. He can only hope they manage to reach his ship safely. He will wait as long as possible, 2 weeks tops, before being forced to continue his journey.

The players at this point will wish to search the town for another way off with possibly another boat. The matter of food will be brought up also. The crew assumed they would not need to bring supplies, and most likely neither did the party. After exploring the Land’s Edge and finding no real aid the demon Castilus will make his first attempt to herd the party towards the castle.

After exploring one of the sites mentioned in the town write up, someone in the group will notice a large arrow drawn on the ground, it points north toward the general direction of the castle. Right after this the party will be attacked by a group from Castilus’s summoning ability. These groups are here to herd the party towards the castle and whittle down the numbers that make it there. Castilus only needs one living being to set him free.

I recommend targeting the NPCs mostly, for now that is. As the summoned creatures die the players will notice the corpses and their belongings vanish. They may suspect illusion magic, go ahead roll saves for them if they ask, then say “nope its still trying to cut your head off.”

Castilus will try to heard the party to the castle with arrows scratched in the dirt and monster groups to attack and herd them. Recommendation- use monster groups with distance attacks to encourage the party to get under cover. Oh and use the less frightening looking ones for now, save the ugly nasties for at the castle. Eventually the players will have to head to the castle once they discover there are no working boats to be found and that they won’t be left in peace to make one. However Castilus still won’t be satisfied, he wants the party weakened or nearly destroyed before they reach him. Once the party finally heads to the castle see Land’s Edge Castle write up for the details there.