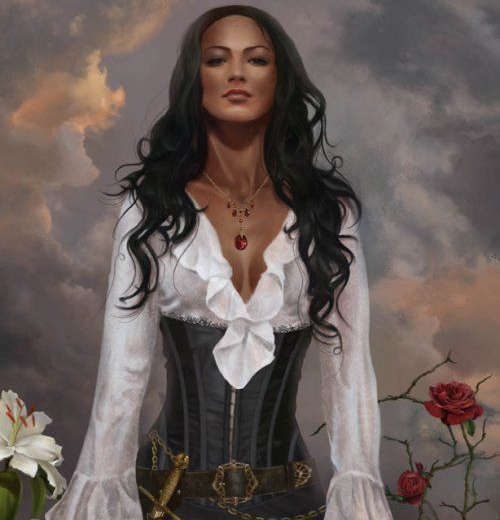 Life can be hard for a woman living in a world of cutthroat pirates and Lily has seen her share of hardship. Her own father served as a pirate till he was killed after cheating at dice. Her mother was claimed by the captain as property. Lily saw her mother’s life was a dead end and vowed never to be a slave to any man.

At 12 she killed an over amorous sailor and stole his pouch, she never looked back. Her fierce determination to succeed eventually brought her a loyal crew and her own ship. Today she is known as one of the blackest pirates to roam the sea. She kills or maroons captives without a second thought.

Her craving for power is her driving force, she feels without a constant goal she will stagnate and fall by the wayside. She often takes lovers but usually has them killed after short periods. She considers herself above the laws of civilized folk, and scoffs at those who would bring her down. For all this she consider herself to be honest and if she makes a bargain, (forced or not) she will hold up to it.

Appearance: Long back length black hair, slim build, long nose with green eyes, alabaster skin. 5’6″ 115 lb.. Dresses in the clothes a male sailor would wear but tied with a red bandana for a belt.