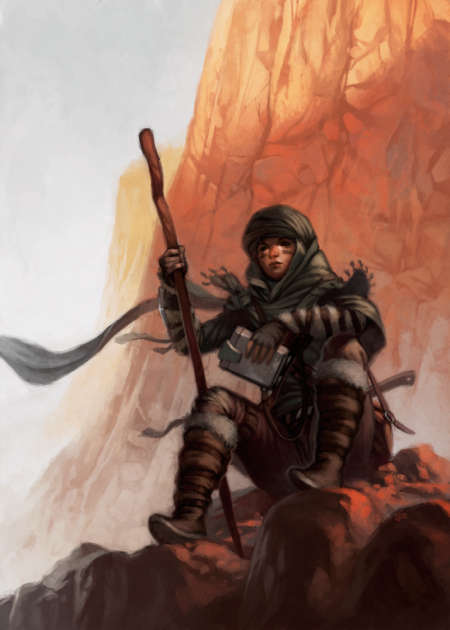 This quarterstaff has the appearance of a normal, dark-colored wood staff, with a simple crescent moon over the horizon carved near its top.

This weapon was created by Fharlanghn, the Dweller on the Horizon. While wandering once, he decided to make a trial of the character of mortals. Approaching the doors of several wealthy merchants, he was turned away because of his appearance of an elderly vagrant. Finally, he knocked at the ramshackle cottage of Philemon, the apprentice to the town’s bard. The aspiring musician welcomed the god into his house, offering the best food he could spare and his bed for the night. As he was leaving the house the next morning, he presented his host with this staff, promising that, as payment for his hospitality, he would never lack shelter during all his days of wandering. With that, the aged traveler suddenly transformed himself into a raven and flew away. Philemon grew to be a very skilled bard, and traveled throughout the land adventuring, always carrying his magic staff.

Abilities: When used in battle, it hits as a +2 weapon (d6+2 damage). It is an especial boon to the traveling adventurer, however, for once a day it can cast “Leomund’s Secure Shelter” as a 5th level caster (creates a 20′ square stone – or similar material — furnished cottage which lasts for 10 hours).