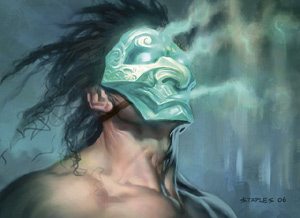 The masks themselves are indestructable by any mean known to man as long as Xoth resides within them. They were made this way to prevent any chance of releasing any part of Xoth from the mask. The only way to release Xoth from the mask is to bring the masks together in a binding spell. If the binding is completed the masks will form as one in a twisted abomination of a face consisting of different parts from all of the masks, including 3 gems. The mask will detect as strong magic from all schools in this single form. Any living being that wears the formed mask will find themselves within the mask’s prison as Xoth posseses their corporeal form, no save.

As one piece, the mask will function as if all of them are being worn at the same time as long as Xoth resides within. By the time this is realized by the wearer it will be too late, they will be the mask and Xoth will be them. If detected for magic with another person’s soul within the mask it will radiate a moderate magical aura of all the schools but lose all its power. Now it is just a prison for the soul within. Destroying the mask is now possible thus freeing the soul. A raise dead or resurrection must be performed to restore the released soul.

One of the gems that is the single mask is also a phylactery for Ssslhack, the guardian of the mask of alteration. Xoth is the only other person who knows of this gem and has prepared for its use. If in living form Xoth is killed his soul will go into the phyactery destroyng Ssslhack’s presense forever. The gem may be broken as it was not part of the original design of the mask thus destroying Xoth.

Suggestion Power: When two or more of the masks are owned by one being Xoth can exert a small influence on the person once per day as per suggestion spell (DC 10). For each mask after the 2nd possesed the DC increases by 2. If all the masks are together the DC is 25. Xoth can suggest the owner of the mask wear it thus releasing Xoth even he they know the consquences of such an act. They will feel they can control the power of the mask.

This mask resembles a small black domino mask that ties with a fragile black string. The mask grants the abilities to cast 1 divination spell from each level of magic (1-9) that the user could conceivably use if he were a mage of that level. The mask’s abilities can be used at will, meaning the character can take others actions since the mask is actually doing the casting. The mask can also 1/day perform a variant “locate object” spell. It will point the general direction of any one other mask of destiny, with no clue to distance or any other information.

Abilities: This mask does not have much in the way of consciousness, its only real traits are curiosity. It will occasionally, if left unused for a time, cast divination spells on its own. It will alert the user to what it finds.

Mask of Illusion
This mask is unique in that it comes in 2 pieces. Each half resembles that of a Greek tragedy/comedy mask but with only half a face, one is comedy and the other tragedy. Both must be brought together to be used. This mask also grants the ability of spell casting illusion spells. In addition the wielder, once he becomes bonded, will be under the influence of a permanent change self spell that changes only when the wielder is alone and unobserved but without control otherwise. A GM’s tool basically but robbing the PC/NPC of his natural looks unless he uses another spell to simulate it.
Abilities: This mask has a slight consciousness causing it to become playful in non violent situations. It will casts some its illusion spells to cause practical jokes but never on the wielder.

Mask of Evocation
This mask is a full face mask, it is deep red in color and depicts a demonic creature, its features twisted in menace. This mask also grants the ability to cast invocation/evocation spells as with the other masks. This mask also grants the wielder a permanent +1 to hit and damage.
Abilities: This mask is bit more alive than others, it is filled mostly with a sense of rage. When the wielder becomes angry the face on the mask begins to twist itself into ever more angry looks as if straining to climb out and destroy the offender. The wielder himself will find it more difficult to keep his anger under control. When the wielder is angry the mask may unleash its spells against the offender even if it is the wielders closet friend or ally!

Mask of Necromancy
This mask appears to be a simple hand held party mask of death. It resembles a white skull, has holes for eyes and mouth, and has a rod for holding up to ones face, no tie for this one.
The mask of necromancy takes no active actions that the player does not desire but it does influence his thinking. Once bonded with the mask the wielder gradually becomes less emotional, caring less for humanity, eventually breaking all ties with friends, family, and lovers because those relationships are unimportant. The wielders alignment will slip to a true neutral ideal. GM’s decision on the rate to do this.

Abilities: The mask has the typical powers of its type, spell casting, but also allows one other type of spell. Once a day, depending on level, the mask can cast a fear type spell, type depending on wielders level. Spook (1st wiz. spell) is the spell unless the wielder is 7th level or higher in which case it is Fear (4th wiz. spell), at 15th level this becomes a Symbol of Fear (as 8th level wiz. spell). Note: The mask acts as the focus for the fear-type spells so victims must be looking in that direction.

Mask of Abjuration
The mask covers the whole head and appears to be made of a bluish metal, somewhat resembling a full face helmet but very plain.

Abilities: While wearing this mask the wearer is not subject to the effects of Vorpal Weapons or any other method of decapitation. This mask has the usual spell casting abilities as the others. This mask of abjuration has a personality ruled by fear and caution, forcing the wielder to take a penalty of 1 to all initiative checks but a bonus of 1 to all saving throws.

Mask of Conjuration
This mask has the appearance of a reptilian humanoid perhaps a kobold or lizard man. It ties to the head with a string made of thin silver.

Abilities: This mask has the usual spell casting abilities of the others. Its personality is extremely efficient so that when any conjuration/summon spell is cast the maximum number of creatures will be summoned.

Mask of Enchantment
This mask covers both the face and the head. It consists of a crown made to look like gold, but fake, and a veil made of heavy leather with holes for the eyes.

Abilities: This mask has the typical spell casting powers as the other masks. Any charm-type spells, spells used to befriend someone, cast by either the wearer or the mask are -4 to save. The wearers CHA is considered to be a 19 when wearing the mask.

Mask of Alteration
This full face mask gives the appearance of a bird of some sort. It has a long beak-like nose and the edges are surrounded with multicolored feathers. The mask itself is a pale yellow in color.

Abilities: This mask has the usual spell casting abilities as the others. In addition this mask is very inquisitive by nature and adept at the abilities of language. Each day the mask will pick up the native language of the first individual of a different race that the wielder comes across. This language comes across telepathically to the wielder. The language fades as the wearer sleeps.

History of the Masks

Bet on the biggest League of Legends, DOTA 2, and Counter-Strike tournaments online at Bovada! Get up to $750 in bonus bets with the Bovada promo code at https://casinositesusa.com/bovada-sports-free-bet-bonus-code/. Find reviews of all the best USA casino sites at CasinoSitesUSA.com.