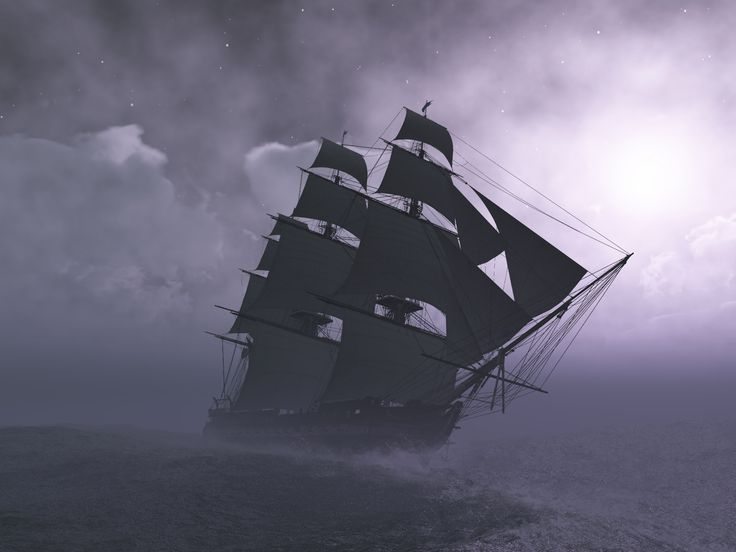 The players have escaped from the island with The Mask of Necromancy but still have other foes to contend with.

While they were gone the Necromancer Scathe made his move. He killed and animated most of the pirate crew and forced the rest into the crew quarters.

Note: Scathe must keep a few crew members alive because he doesn’t know how to sail the ship properly. Also Scathe will not cast any fire based spells since he knows that burning down the ship is a death sentence for him as well.

Scathe has hidden undead he has created in spots all over the ship, he intends to use his Consciousness Skip spell to attack the returning shore party and take the mask from them. His first attempt will be when the party approaches the pirate ship in the long boat.

The first warning the party will have, that there is a problem, is when a zombie, with scathe inside it, placed at the ballista fires at them! He will only get 1 shot at the party before they are too close.

They will be unable to make out the fact that person firing the ballista is undead. As they approach close to the ship they will see several bodies, 6 in total, floating in the water near the boat. If they approach without precautions the bodies will suddenly move to attack the party. They will attempt to pull party members off the boat. After 1 round another zombie will surface, containing Scathe, and will cast a fireball spell at the longboat. This spell will automatically destroy the boat and throw all aboard into the water.

Note: Scathe himself is unharmed by the destruction of a ridden zombie so will not care if he is in the blast radius. If still functional he will continue to cast spells to hinder the party so that the zombies in the water can pull them under to drown them.

After the zombies are dealt with the surprised party will head for the boat. As they attempt to climb up the sides 2 zombies will drop large pieces of metal down on the party, spare pulleys used for rigging. Pick targets at random, those climbing will be unable to use dexterity bonuses and the zombies will have a bonus of 2 to hit, from higher position and hindrance.

Each dropped piece of metal will cause damage of 2d6 and will force a DEX check (DC 15) or fall back to the water. It will take 2 rounds for a non or lightly armored character to climb up,3 rounds if in medium weight armor, and 4 rounds if heavily armored. Characters failing a STR check (DC 5) must add 1 round to their climbing rate.

Those first reaching the top must deal with the 2 zombies. Fighting while clinging to the side of the ladder will mean using only 1 hand and forces the characters, maximum of 2, to take a -2 to attack rolls. Tumbling might allow a character to get up past the zombies (DC 25).

As soon as a character touches the main deck more zombies come to join the fight. There are a total of 15 more scattered around the deck. After 1 round of combat with these creatures Scathe while inhabit one and attempt cast a hold person spell on someone engaged with zombies, so they may be automatically slain.

Meanwhile any characters that have been transformed into undead will be taken control of by Scathe. He will command them to slay the party and they will be unable to resist. Hopefully the party will have left any characters transformed in this way back in the water. After casting hold person spell Scathe will cast any damage spells that will not destroy his zombies. Once they are gone he will feel free to cast area effects spells. If the body scathe is in is destroyed he will jump to one of the zombie manning a ballista. He will then turn it towards the deck and use it on the players directly. Targeting those with anti-undead abilities first.

Once the deck area is clear the party will want to proceed below decks, signs of battle are everywhere. The floor is slick with blood but no bodies are to be found. If the players approach room 10, the quartermasters hold, they can see the room has been broken into and all weapons and armor are gone.

As they come into this area a zombie inhabited by Scathe will come out of the the galley in area 12. It will burst out of the galley door and cast magic missile at a random target. If it survives long enough it continues in this fashion till destroyed.

15. All surviving crew members, 15 in total have been locked in here. So have the 5 remaining members of the Merry Ann’s crew. They will be unwilling to face the undead. They will give details of the battle with the necromancer. They have no weapons and quite a few are wounded.

18. As the players progress through the area 18 more zombies will stumble out to attack. Scathe will inhabit one body and attempt to cast spells as long as possible. He will flee the body before it is killed and will begin to cast summon spells through the Mask of Conjuration. He will begin summoning creatures into the hallway outside his room in an attempt to keep the party out.

He will have the mask begin casting a lesser planer binding spell (for 2E the spell is summon elemental) Regardless of the edition of D&D used it will take him 10 rounds to complete the spell and summon a water elemental. Choose a size that is very challenging to the party. All the other preparations to trap the being have been completed. It will fail the save to serve Scathe and will obey his commands.

Note: Remember that summon spells from the mask are always for maximum effect and the creatures summoned are by the casters choice not random

22. Scathe will be located here. He will be attempting to have the mask cast summon elemental (2E) or lesser planar binding (3E). Scathe will brag of this fact and attempt to keep the characters at bay with a wall of force spell to block off half of the cabin. Players must become inventive to reach him in time. possibilities include going back up top and casting or attacking him through the porthole, cutting through the wall in the next room or the floor underneath him, or dispelling the wall of force.

If the characters can kill Scathe then the summoning will stop automatically, unless you feel they haven’t been challenged enough then by all means throw an uncontrolled, summoned water elemental of the appropriate type at them.