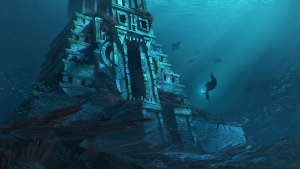 Once the players are ready they can drink the water breathing potions and dive in. The water here is fairly clear but deeper down, away from the sun light is a problem. It takes just over an hour of actual searching to find the temple area, this assumes proper lighting and unhampered swimming. Add appropriate time for those who haven’t taken proper precautions. When the party sight the building from a distance they will encounter the long distance patrol. This will likely be the players first time fighting Sahuagin MM 157 3E in underwater combat and it is up to the DM to educate them.

Sahuagin Fighting in Water: In water, combat takes place on a more 3 dimensional fashion. Sahuagin and their sharks will attack from above, below, or even swim behind PCs. With their better water speed they can do this easily. The only defense is back to back on the ocean floor and even then the sahuagin can attack with both hands,bite, and feet claws. If possible they will make attack runs, swiping a character with claws and keep going. This will allow them less attacks, only 2 claws, but they end up away from the target. This makes it hard to counter attack if your opponents hit you and then run out of your reach. Sahuagin have a natural hatred for wizards, according to the Monster Manual, and will swim around the brawny fighters to attack the weaker spell casters

This patrol will spot the PCs from a distance with their superior vision, they will immediately swim to the attack, save for one who goes to warn the temple of the intruders.

Attackers: 3 sahuagin MM 157 3E, and 1 large shark MM 201 3E. The sahuagin are armed with tridents but will likely make attack runs using only claws. If the players of course find a way to sneak by this patrol then proceed to the temple but remember that the water fighting rules apply to all sahuagin in the temple.