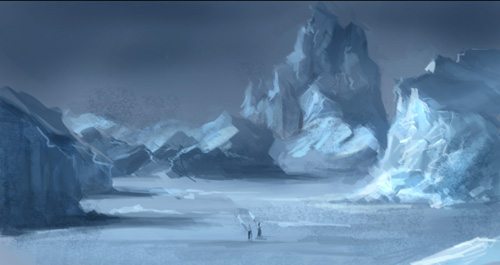 Most likely the players have been told of a haunted cave in the mountains that may hold the mask they seek, from chapter 2b.

The trip is hard due to the deep snows that have set in. Snowshoes from King’s Reach are necessary here or the PCs will have a very hard time. Enforce rules concerning the cold weather: metal armor is nearly impossible to wear for long periods, game is almost impossible to find, movement speeds are half and freezing to death is a real possibility here. Play up the long winter nights and the empty open sky.

Eventually the players will see the rope bridge that they had been told of. The rope bridge is 200′ long and the boards are a bit rickety, of course.

As the PCs debate about the bridge they will see the soldiers from the village again . They are armed with longbows in addition to their earlier weapons, see chapter 2b. They are also accompanied by 6 more soldiers and their leader Dylan. They will fire on the PCs from long range, but they will attempt to close the distance fast. If the pcs decide to cut the rope bridge they will begin to hurry theyre pursuit. The rope bridge is AC 10 and takes 15 points of damage to break each of the 2 side ropes. PCs trying to cross the rope bridge catiously will take 2 rounds single file with a dex checks at +2 bonus. Those feeling a bit hurried will take 1 round but the dex check is at -4. A fall into the ravine is only 25 feet(3d6) but the sides are steep and the snow is deep, about 10′. Dylan will not put himself in harms way if his men lose or appear to be losing. He will flee.

Once across the rocks provide plenty of cover from arrows, 75% if they need to fire back. When the soldier are dealt with or have given up the PCs may continue to explore this side.