Masks of Destiny Campaign – Chapter 6b: Land of the Golems 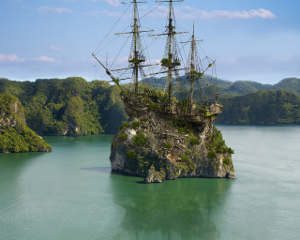 The players (as captives) have reached The Island of Eternal Vigilance. Nearing the island they can see the wreckage of another ship, sunk close to the shoreline. The name on the boat is The Sea Flower. The a few of the pirates will remember the ship as a trading vessel that disappeared without a trace approximately 30 years ago.

The island is small, only about 3 miles across. The ship will be unable to approach due to the rocky coast line. Even the longboat will have problems due to the frequency of the rocks.

The island appears to lift up out of the water and is surrounded on all sides by high cliffs. Only one possible mooring spot exists and astute players will see the wreckage of a previous longboat near that spot. Lily will circle the island first looking for the best place to land. A large temple-like building can be seen near the middle of the island and the cliff edges seem to be dotted by large statues all looking out to sea.

After finding the landing area a discussion will occur as to who is going. Most of the pirates, being crude and superstitious, will not wish to go. Black Lily will tolerate no disobedience of course and may make an example of one of the crew. It will eventually be decided that the players will go since they seem capable and the crew of The Merry Ann are hostages for their continued behavior. The necromancer Scathe will stay out of the mission claiming he needs to study “the masks” further to unlock their powers. Black Lily will finally decide that the landing group will be: herself, the players, and 12 pirate crewman.

Once this is all settled, Scathe will insist that any players he has turned undead go too. Since they are expendable and completely dominated by his will. Finally after all the arguing the longboat sets off. The landing is rough due to the rocks and the if the players check they will see that the sunk longboat seems to have been burned. When they disembark they will be greeted by the sight of one the island’s guardians in its inert form.

The guardians resemble a large (8′) stone man in an ancient style of dress. He appears to be scanning the horizon as if watching for something. If checked, the statues radiate magic (abjuration and enchantment). They are extremely hard and someone could demolish it but they risk damaging their own weapons. The stone man weighs nearly 600 lbs. and appears to have no value as treasure. The pirates will be nervous of the statues and will not go near them.

Past the statue the remains of a small trail leads through the rocks as do two old corpses. Both appear to have died from stab wounds and been dragged to this spot. Their clothing is mostly rags. With some work it can be determined that the decomposed bodies were sailors of some type, possible from the sunk ship in the harbor.