Masks of Destiny Campaign – Chapter 12b: All that for nothing #2 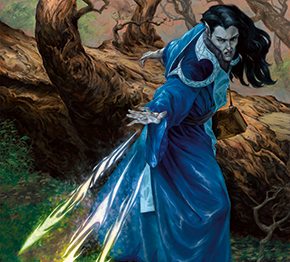 OUTCOME #2 The PCs Recover the Mask of Illusion themselves: Shar may be dead or alive for this situation. If she and her group have been killed by the PCs then they have all the masks. If they only got away with the mask of illusion then Baron Ganth will attack the camp and ambush the PCs at the same time. In the end he will have all the masks or most of them.

After the PCs leave the camp they will be followed by Blackthorn and his men. Blackthorn will send one of his men ahead to the Baron’s army so they may set a trap for capturing the PCs. Even though the masks are supposedly indestructible Baron Ganth wants to take no chances and orders his army to disable and capture the PCs. As the DM make this happen. The wizards below are part of Ganth’s army along with the 300 men to ambush the PCs. Several of the wizard spells are to be used to disable the PCs. If need be use more spell casters and tricks to make sure the PCs go down, beat them into unconsciousness.

After the PCs are subdued they will be tied up chained to one another, spell casters will be gagged, and they all will be closely guarded so they do not escape. 3 Wizards and 25 soldiers will be assigned to guard them. The PCs have enough chain to walk at 1/4 their normal speed at best. If they try to escape the guards and wizards will have no worries about killing them. The PCs are stripped of their gear of course.

As soon as the last of the PCs is awake one of the guards will leave. Within 3 minutes a man of nobility will enter the tent keeping his distance from any attempt at his life. Around his neck is the mask of abjuration. He introduced himself as Horatius Ganth, Baron of the lands of Ganth. “I was such a fool chasing after each mask. I expended resources and men in the pursuit of them and you. I finally realized that all I had to do is follow you. You would eventually find the masks and I would eventually take them from you all at once. It is a pity about all of you. You are resourceful, intelligent, and full of surprises, qualities I find in myself. I would love to have you working for me, but we both know that is not possible.” The Baron sighs. “So the only thing left to wonder is what to do with all of you. I suppose that all I can do is let you go.” With that the Baron leaves the tent. He will politely answer questions if asked only telling the truth when it serves him. After a few questions he will say he has other duties to perform and leave.

In truth the Baron will not let the PCs live. About 20 minutes after the Baron leaves the 3 wizards and 15 of the men will politely escort the PCs to a clearing and tell them that the Baron wants to make sure they leave in the opposite direction of his army. They will not untie the PCs but tell them to start walking and they will watch till they are out of site. At the other end of the clearing on a tree lies their key to freedom from the chains.

When the PCs get about 50′ away any party spell caster will hear the chanting from the 3 wizards, a fireball spell. Give the PCs half action to react to the threat of being triple fire balled, no save. Of course there is no action they can take to prevent their demise. After they have done their actions read them this passage.

“All three wizards in unison unleash their fiery spell. Three small beads appear from their hands and begin to take flight toward you. Knowing your end is within moments, fear and frustration quickly take hold knowing there is nothing you can do to prevent this demise… Only a miracle can save you now…. As quick as each fire bead began its journey so it ends. The beads of fire explode within just a few feet from the spell casters and soldiers. Screams of burning men echo in your ears as you watch what seems to be the impossible happen, a miracle.”