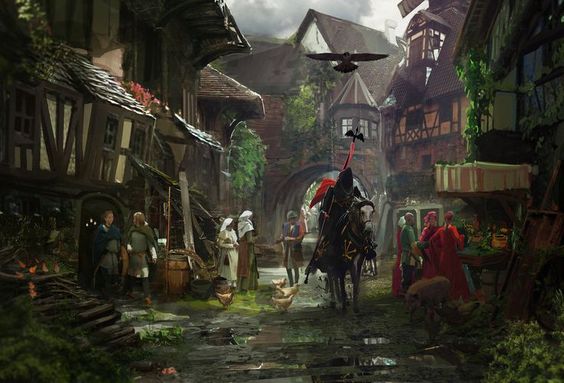 Having spoken with Sir Edwin Aeridah, the party began to make arrangements to leave Foxden Acre for the garrisoned port of Marvey, some 50 miles to the east. Lucia spoke with Mariana Loupieres and her new husband, Leon Mauriset. Mariana said she knew little about the men who attacked her mother, but she spoke fondly of her father, the Duke – of his love of painting, and of the days leading up to his assassination, when she and her mother feared for his mental state. Mariana noted that her father’s paintings had begun to change – from the realist settings he ususally depicted to more abstract and troubling images.

Daniella and Lucia also went to the castle library to do research – Daniella to discover more about the mysterious box that the Duchess had presented to Crinn and Anubis, Lucia to find out more about forest lore. Daniella discovered that the mysterious runes on the box were in Old Draconic, and that one of them was the word for “close”. Lucia also penned a letter to her parents in Lundy and sent it on its way.

Meanwhile, Crinn went to the small village of Lieselle to arrange a caravan to Marvey. He wound up using a company owned by a man named Kinsey, whom he knew to be involved in the postal service of the area as well. Soon a wagon and a coach were booked, and the following morning the party set out on their journey, travelling in style as the friends of Lucia Von Staden of Lundy. Mysteriously, Kinsey insisted on adorning the chaise with the crest of Lundy.

The journey took them to the village of Pontette, where Crinn had a few hands of whist with the coachman. The night passed pleasantly, and the next morning the group set out on the last half of their journey to Marvey. About half way there, the group came upon a lone man riding a horse; he seemed to be a traveller, and an outdoorsman. Crinn noted that his dress and manner indicated that he was from Fribbishire – not a local. Soon the caravan passed him, and out of the corner of her eye, Luce spied the man signalling with a mirror to the far hills. She immediately had the coachman stop the chaise and called to Crinn to tell what she’d seen.

Before anyone could act, 15 to 20 horsemen rode out of the hills and accosted the wagon carrying the group’s belongings. The leader of the group, who appeared to be a local brigand of some kind, asked rudely to see the signet ring of Lucia in order to confirm that she was in fact of the house of Lundy. Grudgingly she gave the man her ring, and after examining it, the brigand warned the group not to travel this stretch of road without protection from Kinsey. It would seem that Kinsey’s repeated promptings to pay for an armed guard were more sinister than they seemed. The coachman informed the group that Kinsey usually paid off these brigands, and wondered why this was an exceptional case. Lucia vowed to write a letter to the duchess to inform her of Kinsey’s seemingly illicit relationship with these brigands.

The remainder of the trip was thankfully uneventful, and soon the group was settling in to their accomodations at the Sandpiper, a local Marvey inn of high reputation. At dinner, Anubis spoke to First Lieutenant Been, of the 24-gun brig “Waves”. He informed Anubis that the Waves was in port undergoing repairs and would not be finished for more than a week. He also noted that a typhoon to the south had been spotted, and that five naval ships were late for port. It was feared that they had been caught in the heavy weather. Of particular concern was the absence of the “HMS Celerity”, which was now over two weeks late. Been also noted that there was a large merchantman in port with a cargo of Sudenwield mahogany bound for Bae Cul. The captain’s name was Freddy Ogutu, a foreign moniker. At dinner, Lucia also spoke with an older woman named Dorothy Hammonds, wife of a local importer named Mitchell Hammonds. She recommended Luce visit a bookstore called Brooks’ and a jeweler called Apex Jewellers.

Crinn, meanwhile, wandered deeper into town, passing out of the soignee residential district near the south gates and on into the market district, where a number of produce and fish mongers were packing up for the day. Beyond this area, he stumbled into a region of town frequented by sailors, eventually finding solace at a pub called “The Old Transom”. The bartender set him up with a tasty stout and told him about a local circus in town that had come up from the south. He said it was a sight not to be missed. He also mentioned a hanging set to occur at 8am on Thursday (arrival in Marvey occured on a Tuesday) – apparently a sailor who had deserted. After deciding to sit in the pub for much of the night, Crinn also overheard talk of a battle at “Lelan” that pitted two Rhainnish 72s – Badditche’s “Indomitable” and Mickles’ “Drachonia” – against three Baazdeener 48s and two 36s. The man said he saw Baazdeener prisoners brought into Bae Cul, and he said “a few more defeats like that, and all this talk of Fialle entering the fray will go by the board”.

After dinner, Anubis, Lucia, and Daniella decided to go to the ballroom for some dancing. Daniella was asked to partake of a minuet by a handsome 3rd lieutenant named Gracas. Gracas invited Daniella to go to the circus that was in town, and she accepted a 2pm appointment for tomorrow. He also mentioned a large lumber ship captained by Freddy Ogutu as a likely possibility for transport to the village of Preen near the Myn Forest, and that Daniella might want to visit an alchemical bookstore called Zabreel’s. Soon Anubis and Lucia were taking up dance partners of their own, but some kind of disturbance broke out between Gracas, another naval officer, and a merchant’s son. The three followed Gracas and the merchant’s son outside, where they proceeded to engage in fisticuffs. The merchant’s son, whose name, apparently, was Harkes, accused Gracas of being a fraud – of having stolen a naval uniform and of pretending to be an officer. Lucia shocked the two men out of their melee with a spell, and when she asked Gracas who the 1st lieutenant of the Waves was, he answered “Steele” – a lie. When Lucia confronted him, Gracas walked off in disgust.