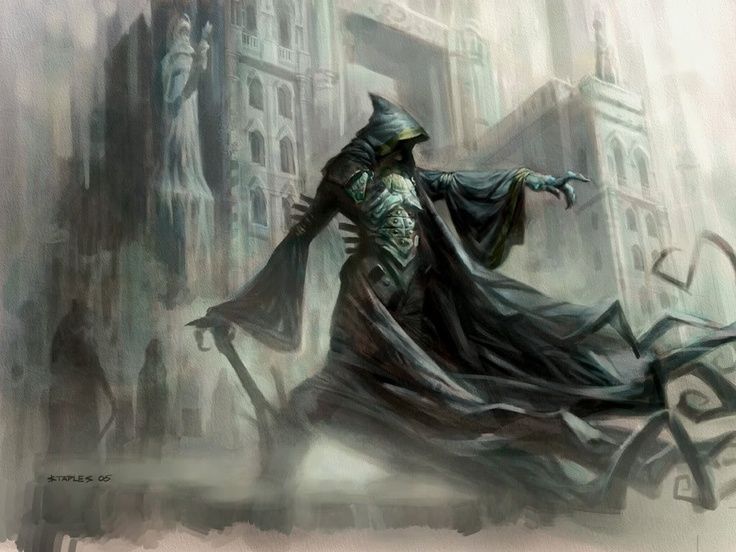 This place is part of the Mask Campaign but may be altered and used for other adventures.

Appearance: The island is a desolate wasteland, not much more than rocks. A few plants dot its surface and a small number of birds but food or real shelter is nowhere to be found. It appears as if the island was placed here, since it juts out of the water nearly 60 feet in some places. It is nearly inaccessible by ship due to the surrounding rocky shoals and the high cliff walls. The island is only 3 miles long in each direction.

The Lost Temple: This building lies directly in the center of the island, it appears to be made of a different stone, something not native to the island. The temple is covered with a glamour that repels all animals from it. None of the wild life nest there or even come near the place willingly. Familiars and other special low intelligence creatures must save vs will (3E DC 20, 2E vs spell) to approach it (familiar, animal friendship, summoned animals, etc.). Intelligent creatures merely feel uncomfortable near or inside the place. This effect can not be altered by spells or any other magic.

The Statues: Only information of note here is that all these statues appear to be looking out to sea. Most cover the cliffs of the island but a few (6) dot the landscape in different areas. They will only activate if the mask in the temple is taken away from the building.

Wandering Encounters: 1d4 zombie sailors 3E MM 191 murdered by Edmund Vargas or shipwrecked and starved to death. 1d4 small birds or amphibious creatures- all must be able to get food from the sea.

The Guardians Golems of the Island:

These creatures are magical constructs-golems. They have been set on the island to guard against thieves taking a long ago stolen treasure from the temple. Without a purpose they waited attacking anything that came upon the island. Eventually the wizard Edmund Vargas came to the island on a chartered boat. The guardians attacked the sailors that landed with him but Vargas knew ways to slip past the golems. He entered the depths of the temple and found the altar stone the golems were bound to. He killed any surviving sailors and destroyed their boat so no one would know of this place.

Edmund sacrificed his own life to reset the altar stone’s enchantment. He set the Mask of Necromancy upon it and the guardian golems are now bound to guard the temple’s treasure once again.

The golems use the statistics of stone golems 3E MM 108 with a few differences noted below.

Improved Grab (Ex): A golem may attempt to grapple an opponent instead of punch. If successful the golem will then bearhug the opponent for 2d6 a round and the opponent will be unable to attack. Due to its immense strength and stone construct it will be difficult for players to break free. A strength check (DC 25) will be required to release one’s self (2E bend bars/lift gates) or having companions destroy the golem. The escape artist skill may be used at the same DC.

Regeneration: The guardians regenerate 2 hit points per round (2E 1 hit point) even after their destruction. They cannot regenerate if they are totally destroyed through disintegration or similar means. A golem that has been hacked to pieces will begin moving and attacking again once it has regenerated 1/2 its hit points.

The golems will attack those who have stolen the mask from the temple preferentially. They will attack any other living beings on the island that comes out of the temple. If a golem retrieves the Mask of Necromancy from a player it will take it back to the altar in the temple. Then they will return to their posts and go inert once again.

1. The Outside: No simple animals will approach the place due to the wards put here, any exceptional animal (such as a familiar) may save vs will (3E DC 20, 2E vs spell) to approach. The doors are made of a greenish stone, each having only a carved face inset within the door. The faces appear to gaze sternly, judging those who come before them. An optical illusion will make it appear as if the eyes of the face move to observe the party members. The doors have to be pushed open to grant entrance to the temple, once inside the party can see the entrance to the great hall.

2. The Great Hall: The party can see a large hallway supported by pillars. To each side the hallway opens going left and right. It also seems to continue straight ahead farther than they can see in the poor light.

3. Deeper Into the Great Hall: The party can see that the pillars that flank them on either side are carved with images of stern faced warriors. Each gazing into the hall area as they pass by. Further ahead lies an altar of some sort surrounded by 4 small fountains.

4. Portcullis Spear Trap: As someone passes through this area, a pressure plate lies in the floor (20% of stepping on per person) if triggered metal spears jut from hidden holes in the walls, ceiling ,and floor. The individual who triggered the trap must make a reflex save (DC 20, 2E DEX save at -4) to avoid. Those who passed right before or after that person must save (DC 15, 2E DEX check at -2). The damage for this trap is 5d6. Anyone caught in the spears will be stuck and continue to bleed for 1d4 per round. The spear will block the tunnel as a portcullis and must be broken to continue or leave as the case may be. Make a random roll for what side they land on if they make their saves.

5. Trapped False Door: This door is stone and has a handle but must still be pushed open. As the door is pushed open a large counterweight is pushed into place triggering a section of the ceiling to collapse like a dead fall trap upon those within 10′ of the doorway. The damage is 4d10 with a reflex save (DC 20, 2E versus petrification) for half. You can have players make listen rolls (DC 15) to notice a second grinding noise besides the door opening.

6. Concealed Pits: There are small pit traps at this area. The first person crossing here is likely to fall in unless it is noticed first, reflex save (DC 25, 2E DEX -4). The pit is only 20′ deep but is lined with stone stakes, damage 5d6. The sides of the pit count as slippery walls and the unfortunate victim will likely have to be hauled up with rope.

7. Another Trapped False Door: This door is trapped with another dead fall like area #5.

8. Altar Area: If the players approach this area they see an carved altar stone. It is featureless save for a large depression in its top. The altar is surrounded by 4 small fountains.’ These fountains magically shoot a small amount of spray about 1′ into the air continually circulating the water in them. If checked for magic they radiate both conjuration and abjuration.

If the altar stone is touched or the party discovers the secret door at area 9 then 4 water weirds (HP 30, 30, 30, 30) are summoned and attack the party. These creatures will have maximum hit points due to the magic within the fountains. They will not follow retreating party members but will hide within the fountains awaiting their return.

9. Secret Door: If the water wierds are slain (or not yet summoned) a secret door can be found behind the altar stone. The actual trigger for this stone is set into the left most pillar, if that is not found (search DC 20) the door must be broken down to enter the area, which will attract the attention of the water wierds and cause them to attack. Beyond the door is a small featureless room with a stone ladder which leads down into darkness and room 10.

10. Secret Room: The stone ladder goes 20′ before dropping into this small room. There are only 3 visible features to this area. Another altar stone with The Mask of Necromancy upon it, and a skeletal corpse which lies a few feet away from the altar. The altar radiates strong conjuration magic if checked. The skeleton has only a few rotted tatters for clothing and the remains of an old dagger. No wounds are visible though a stain as if from blood is visible near the body. This is the corpse of Edmund Vargas, his last living act was to slit his throat and enact the ritual to become a spectral mage.

If they approach the altar stone the spectral mage that was once Edmund Vargas will appear. He will converse with them first warning them against taking the mask and telling them any relevant details of his life or trip here that they ask. He will not divulge any positive details concerning the mask’s powers though he may give warnings concerning the arch-magi Xoth. If the party is not dissuaded by the apparition he will attack to destroy them, see Edmund Vargus for details on the spectral mage.

If Edmund Vargas is destroyed then they may claim the mask, but before his death Vargas tied the mask into the power of the altar stone so taking the mask from the stone awakens all the golems on the island. Who will seek to retrieve the mask and kill the party!