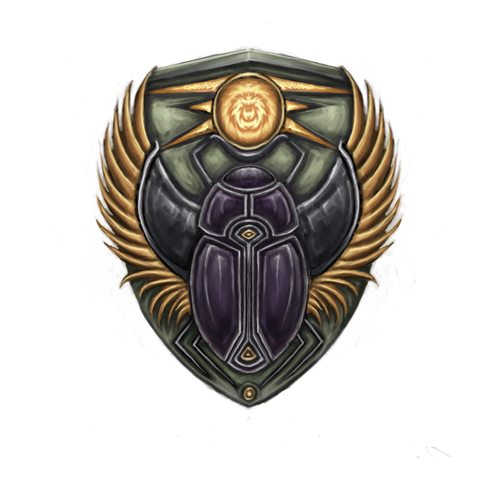 The scarab was created by the arch-mage Vothra decades ago for a dual purpose. Vothra occasionally used demons for certain tasks he wanted accomplished without getting his hands soiled. In his dealings with demons he found them to be untrustworthy as demons should be.

During one such summoning a demon named Ashkur was enslaved to retrieve a relic from another wizard’s tower located in a small town. The demon retrieved the relic but in turn took pleasure in killing the previous owner and the inhabitants of the town as he left.

Now Vothra dealt in the dark arts but did not wish to stir the pot by killing those not needed to die, especially one of his own kind. The demon never returned the relic to Vothra, he used it to create more havoc. Vothra constructed the scarab to capture the demon in an eternal prison.

After a dozen days In a large battle of magic and demonic power Vothra managed to capture the demon within the scarab. After investingating and making sure the demon was captured Vothra noticed that even though the fiend was imprisoned he still had some power in the outside world. The demon could slowly such the life of those who wore the scarab.

Vothra used this knowledge to present the scarab as a gift to rivals of his. They would be found dead within 3 days of adorning the ornament. Vothra used a spell so when the scarab completed its work it would return to its creator. In the end Vothra had the last laugh on the demon, forever imprisoning him but still using him for his purposes.

Abilities: The scaran drains 1d6 STR and CON every day from those that wear it. It also have the ability to make its wearer think they have had the scarab for a long time, thus ignoring the possibility of it being the cause of their poor health. (Will DC 28)

The scarab will detect as abjuration magic as that is what holds the demon inside. If the scarab is destroyed (DC 25) it will release the demon (DM discression to which type of demon). The scarab can be removed with a remove curse spell against a spell resistance of 30.