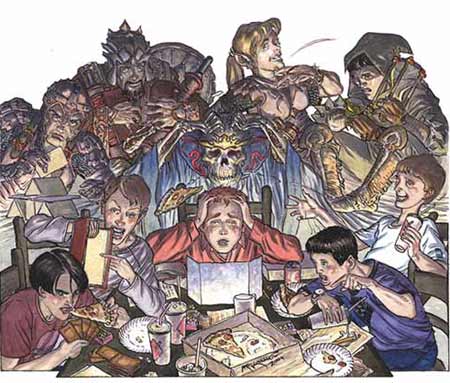 As many DMs have, I have often found myself in a position where I need to create a modular adventure for an upcoming game, and I come down with “DM’s block.” I hate doing stereotypical quests, I hate stealing good ideas from books (I find it humiliating when I’m caught at it by a player who knows my source), and I’ve sent 1st-level PCs up against kobolds, goblins, and orcs more times that I can count. So I developed a random adventure generation tool to help me get over the hurdle. I have to fill in my own details, but it does a lot of the early work.

Challenge:
1) Investigation
2) Strategy
3) Rescue/get in and out
4) Puzzle(s) or other inanimate
5) Redemption/reclamation/healing
6-8) Hack ‘n’ slash

A 3 on the first chart gives me an “intelligent master” as the primary antagonist, with a “roll again” to determine exactly what it’s a master of. I get an 8, for an unusual combination of an intelligent master of a human or demihuman individual. (I separate out “intelligent” from “(demi)human” because sometimes I forget about humans as “monsters,” but there are other monsters [dragons, illithids, etc.] that also make good intelligent enemies.) This isn’t much to go on, so let’s move on.

A 2 on the second chart gives me a nontraditional dungeon as the venue–basically, any “dungeon” but a ruin or cave. That’s pretty wide open as well, but it gives me a start: I’m looking for something with a lair or hideout.

An 8 in the third chart makes the primary challenge a hack-and-slash. As you can see from the fact that I put 6 through 8 as hack-and-slash, I feel that this represents the primary form of challenge in D&D and is overrepresented accordingly. Since a hack-and-slash game generally involves more than 2 fights, this means that my “intelligent (demi)human needs some minions of some sort. Thieves’ guilds come immediately to mind. Religious organizations, such a cults, come a close second. Any other organization, such as wizards’ cabals, mercenary camps, and so on will also work nicely. Moving on, to get even more focus:

My fourth roll, a 6, indicates that the party’s objective is to rescue or protect someone. Given the dungeon venue and the humanoid opponents, rescue seems most likely. Guiding someone to a location in the ruin is also possible, but rescuing someone from a cult or thieves’ guild works nicely.

The fifth roll is a 1, showing me that the party has an ally whose strength is on par with theirs. Suddenly a protection mission is looking a lot better–they can guide their new ally into the ruins for some reason.

So it looks like I’m going to be helping a powerful ally penetrate the lair of a thieves’ guild or cult with a (demi)human leader but some sort of mastermind behind the scene. The cult is looking good for that; I can use an outsider easily enough, manipulating the high priest. That’s a bit trite, though-I’ll keep my options open. My one huge blank is the venue. It’s easy enough to say “nontraditional dungeon” but it’s quite another to do it. I could roll again if I’m really stumped, but then it comes to me: a giant tree.

Now, everything falls into place. The cult sub-leader is now a druid (blighter maybe), human for lack of a reason not to be. He has organized a cult around a fictitious god, using his druidic powers to pretend to be a cleric. He’s been telling the cult to gather riches from the nearby town to sacrifice to his god, who will appear and reward them all. But he’s really currying favor with his secret master and ally, a green dragon. The PCs’ ally is a former friend of the druid (a scout, ranger, or another druid work well) who just learned of his evil ways (or, if the PCs use divinations, they could learn the cult leader’s identity and tell the friend somehow). They need to escort the NPC to the druid, fighting their way through the cult up through the massive tree they’ve carved out for a lair, so they can find out what’s really going on. Maybe the friend, with the PCs’ help, can talk the druid out of his evil ways, but they’ll still have the dragon to deal with!

Sounds good to me. Your mileage may vary, but I’ve found this tool to be immensely helpful, and I hope you do too. Let me know of any successes (or problems) you have with it.