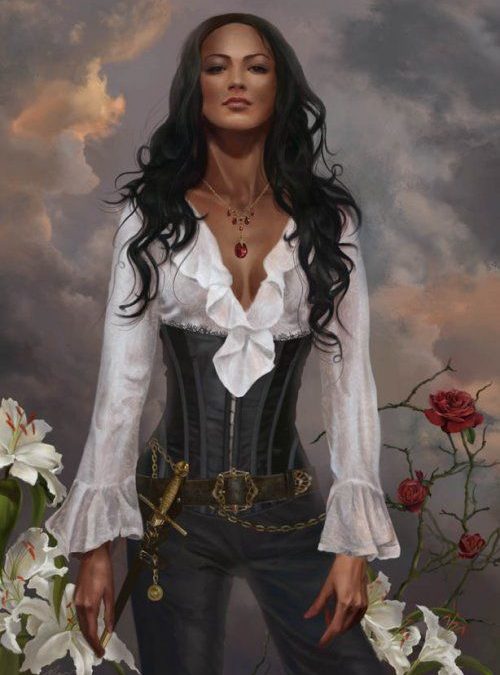 The players have become captives of the pirate queen Black Lily and her ally the necromancer Scathe. One of the players may have been allowed to stay out of the hold if he has given her an oath of honor on the lives of the rest of the party. If Lily has found such a character she will be attracted to him and make him become her lover. If he refuses she will hint that she might then kill his friends if she felt slighted. She will go to lengths to have the player be seen by other prisoners as her lover. This is so that he will be weakened by their hatred for him and will have to turn to her. Remember that she is evil and enjoys making others suffer at times. She will offer the player a position on her crew, though she does not mean it initially. She will offer him wealth and of course herself. If spurned she she will become threatening or even violent, but is quick to cool if properly placated.

During all this the ship will sail away from the temple. Having plundered The Merry Ann (Chapter 4d) Lily’s crew sets it a fire and sails eastward on their own boat. Scathe will return after this time after reading the notes the players have from Charilus and questioning any dead companions, speak with dead spell, or perhaps the crew if no players have died. He now desires the masks for their abilities would supplement his own.

By chance Scathe knows of The Isle of Eternal Vigilance and was sailing in that direction. His only information concerning the place is that an item kept there was an item of powerful necromantic power. He surmises that it is the Mask of Necromancy and desires it for himself. In the mean time he has started the bonding process with the Mask of Conjuration.

Before they reach the island he will have completed the bonding process. During this time the players in the hold have no real chances for freedom, they are well enough and are being fed much to Captain Pectas surprise. He believes that some worse fate must await them at the island. The crew will be filled with hate at the player who accepts Lily’s offer unless the other players can convince them that it is a ruse or perhaps forced upon him. Those who have been wounded will heal naturally but casters will have no way to regain spells.

The island is reached 15 days later.