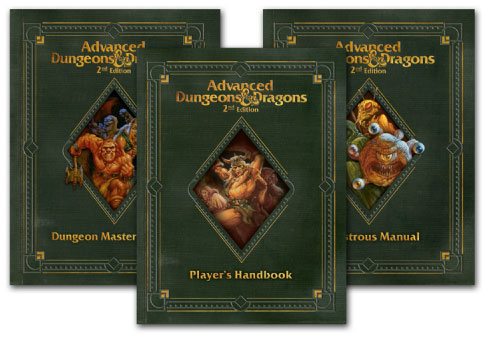 The concepts of Wounds and Vitality, from the Star Wars Roleplaying Game, explain character health much better than the more traditional “hit points”. This system transplants the Vitality and Wounds system from Star Wars into the Dungeons and Dragons game.

What do Vitality Points represent?

Vitality points, or simply vitality, represent a character’s ability to turn a direct hit into a glancing blow or near miss. Damage is usually deducted from vitality points.

If a character runs out of vitality points, they can no longer avoid real damage. Any additional damage is deducted from their wound points. With only wound points left, they are fatigued. They cannot run or charge, and suffer an effective penalty of –2 to Str and Dex. In addition, each time they take wound damage, a Fortitude save vs 10 must be made or the character is stunned for 2d6 rounds.

What do Wound Points represent?

Wound points, or wounds, represent how much damage a character can take before falling unconscious or dying. Damage is deducted from wound points only after a character’s vitality points are exhausted, or they are struck with a critical hit.

If a character’s wound points drop to 0, they are disabled, but conscious. They may only perform partial actions, and any full action performed by the character (attacking, casting a spell, etc) causes 1 wound point of damage.

Any spell that grants a temporary bonus to wound points will not stabilize a character, but it will assist in keeping them alive longer, by putting them further from the –9 limit for the duration of the spell. If such a temporary bonus raises the character up to 0 wound points or above, they regain consciousness for the duration of the spell, but are still affected as if they were at less than 0 wound
points.

How are Vitality and Wound Points determined?

Wound points do not increase with level (except in the case of spending an attribute point bonus on Constitution).

Upon reaching 3rd rd level, Rokan gets another 8 vitality (roll of 5, +3), and when he reaches 4th th level, he decides to use his ability increase to raise his Constitution score to 17. Thus, he now has 17 wound points, and his player rolls a 10 on his vitality die, giving him another 13 vitality… therefore, at 4th th level Rokan has a total of 17 wound points and 42 vitality.

If a character’s Constitution bonus is increased, even temporarily, such as for the Barbarian’s Rage ability, wound points increase by the added bonus, and vitality increases by the appropriate amount, based on the bonus of the new Constitution score.

Example: Regnar the 4th th level Barbarian, with a 16 Constitution, enters a rage when attacking an ogre. His normal Wound and Vitality scores are 16 and 38, respectively. While in a Rage, his Constitution score increases to 20, thus he now has a wound point score of 20, and his Vitality increases by 8, to 46, since the new Constitution of 20 gives him a bonus of +2 Vitality per level over what he had with 16. When he was done raging these extra points would immediately fade.

For Creatures: A creature’s wound and vitality scores are determined by its hit dice and Constitution score (if it has one… more on that later), but in a different way than for characters. Roll a creature’s hit dice normally, as you would for hit points. Then subtract the creature’s Constitution score from this total. (Note: Larger creatures have more wound points than normal.

Example 1: an ogre with 15 Constitution has 4d8+8 for its hit dice. Rolling these, 28 is the result. Subtracting the ogre’s Constitution of 15 leaves a total of 13, so the ogre has 13 vitality and 15 wound points. His total of both is still 28, which equals what he would have had in hit points.

Example 2: a mature red dragon, with a Constitution of 23, and has 25d12+150 for its hit dice. Rolling these, 312 hit points is the result. It is considered a Huge creature, thus it has x2 Con in wounds, or a total of 46 wound points. Subtracting this amount from the hit points gives a total of 266, which becomes its vitality score. Thus it has 46 wound points and 266 vitality.

If the resulting number is negative, then the hit points rolled are equal to the creature’s wound points, and it has no vitality.

Example: a goblin, with a Constitution of 11 and only 1d8 for hit dice, cannot roll above 11 for hit points, therefore whatever it rolls for hit points becomes its wound points. This point total being less than its Constitution score can be easily explained by the rough and unsanitary conditions of goblin society. However, a goblin leader would probably have full wound points, and possibly vitality gained from having levels in a hero class.

Example: a lich with 11d12 hit dice, has 78 hit points, but since it has zero constitution, it does not have any wound points, thus all 78 hit points go into vitality.

What Happens with Critical Hits?

Weapon damage multipliers are now reduced by one rank. (See the Revised Table 7-4: Weapons at the end of this article.) A weapon that had a multiplier of x2 now does normal damage, x3 goes down to x2, and x4 is reduced to x3. Weapon threat ranges remain the same.

Critical hit damage is rolled multiple times (rather than the result of one die being multiplied by a factor), with any modifiers for magic or strength being added to each die.

Example: a fighter with 17 strength gets a critical hit with his +1 magical battleaxe (x2 critical). Thus, he rolls 2d8 and adds his enchantment bonus and strength bonus to each die, for a total of 2d8+8 damage.

Download the rest of these rules at Vital Wounds (ZIP 609 Kb) by Scott Sutherland (Veritas).